The Tanka of the "Last Samurai" 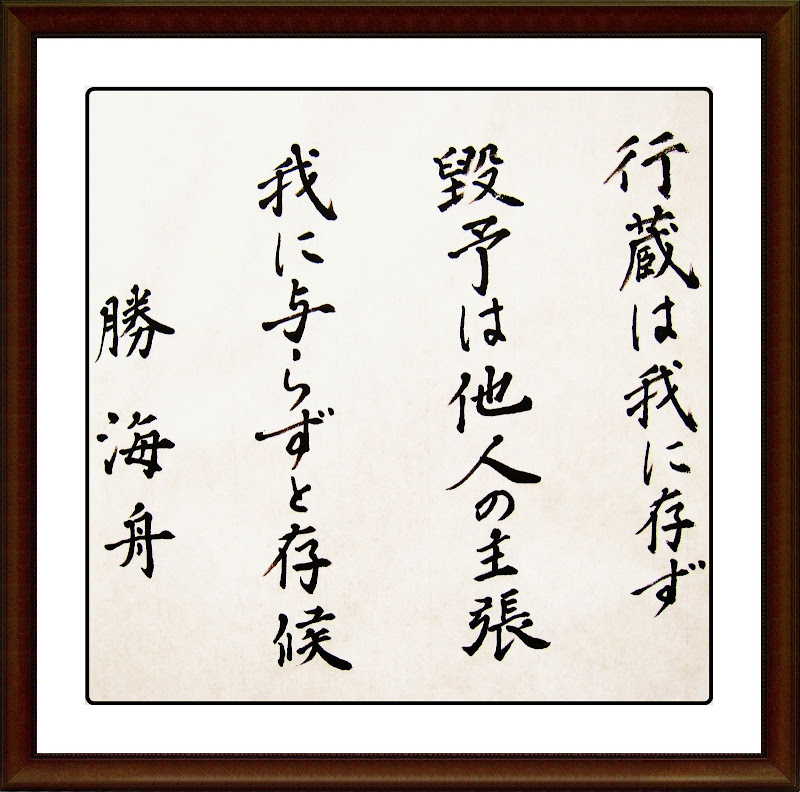 This Tanka means a thing such as interesting next.
"Myself have the responsibility of the action."
"It has nothing to do with me really that another person says
various bad-mouths and criticism. "

This is written by hiragana letter and Kanzi, Regular script. 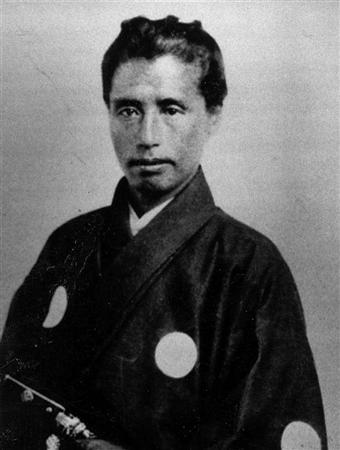 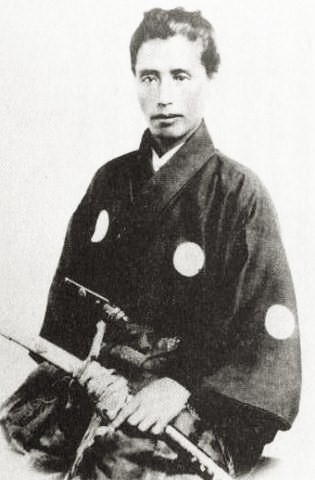 He was the master of the swords of the full mastership (Menkyo Kaiden).
However, he seems to have never cut the person throughout his life.

He sealed his sword not to cut a person.
He was the true samurai with tough spiritual strength. 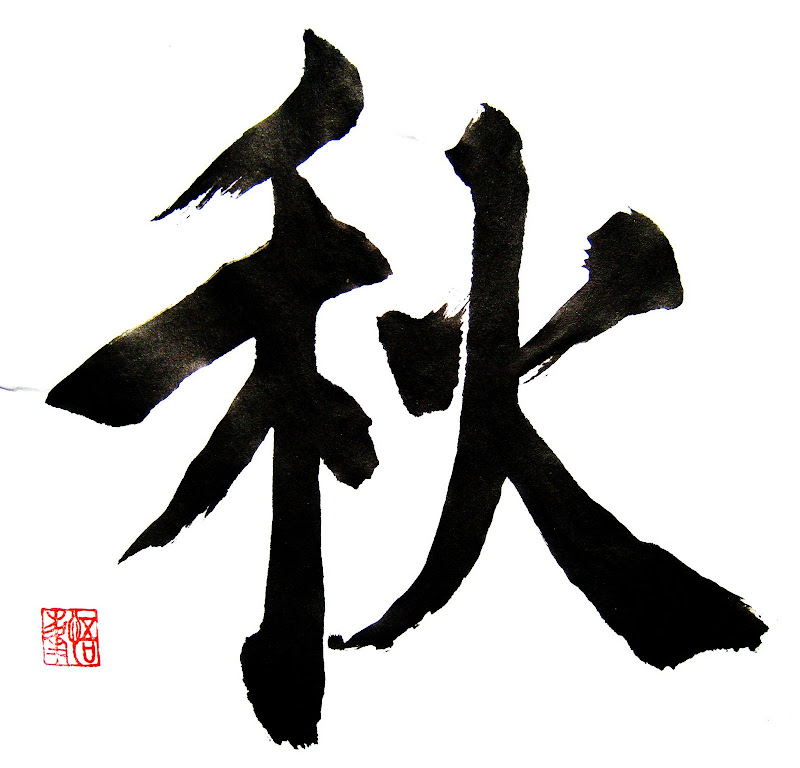 "秋" (shū,or aki). It is translated in autumn.
This character is written by Kanzi, Regular script.
3 comments: 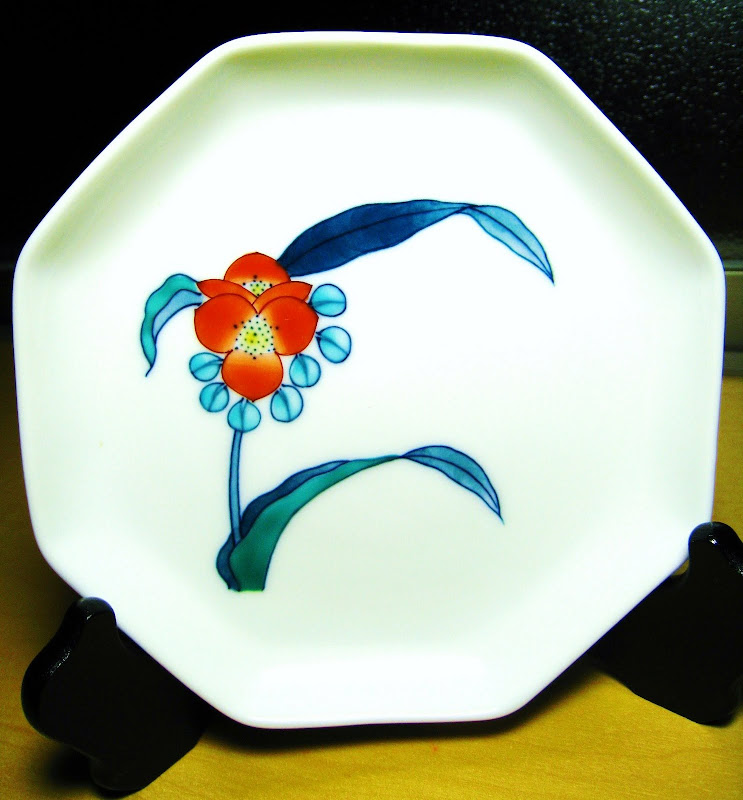 Nabeshima ware is high quality porcelain produced by the kiln of the feudal clan direct management in Saga (Nabeshima ) from the 17th century to the 19th century.

It points at a product baked by the kiln of the feudal clan direct management and merely says "Nabeshima". 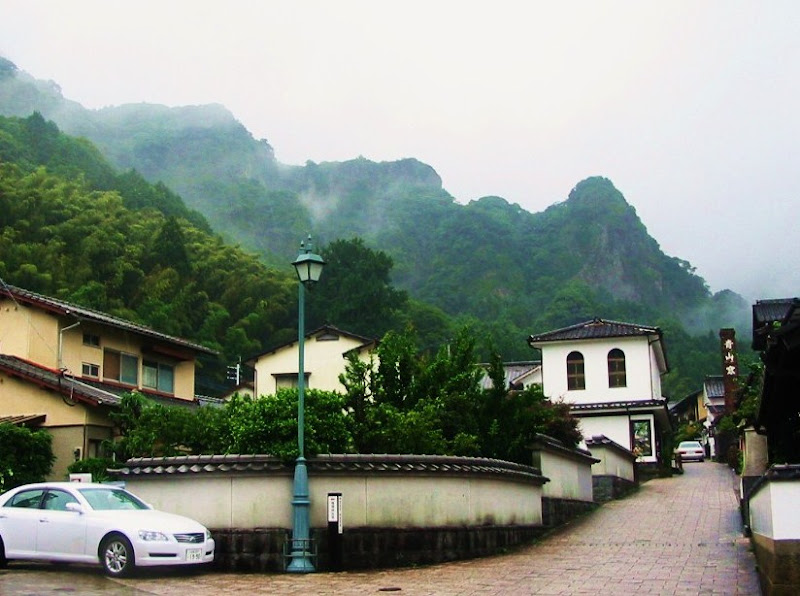 The high-quality articles such as business product or the present to a family to inherit the shogunate / the many daimyos of the feudal lord by the kiln of the feudal clan direct management that Ookawa Uchiyama (the Imari-shi, Saga southern part)had wholly.

It is call this "Nabeshima ware" after modern times, and it is distinguished from "Imari ceramic ware" (Arita ware making) 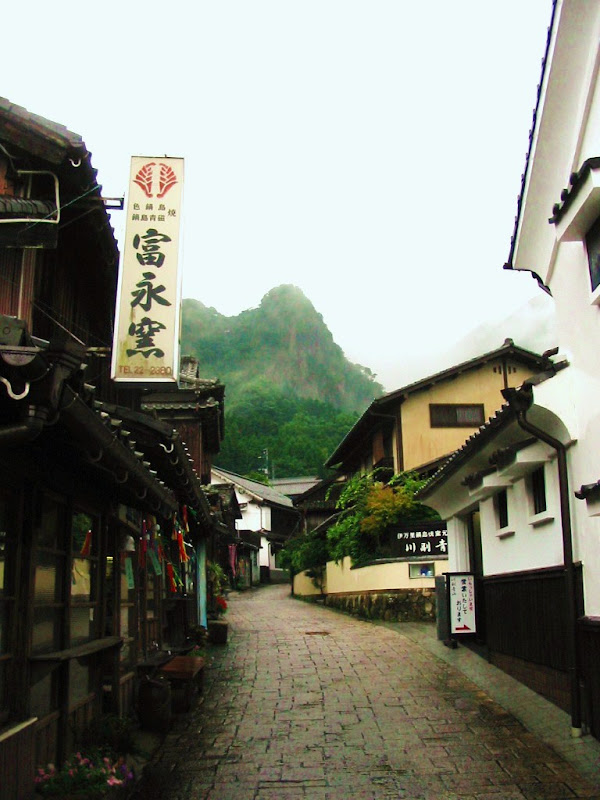 A way of "Ookawa Uchiyama"among the mountains which are steep in the circumference.
I like scenery and the ceramic ware of this very local place. 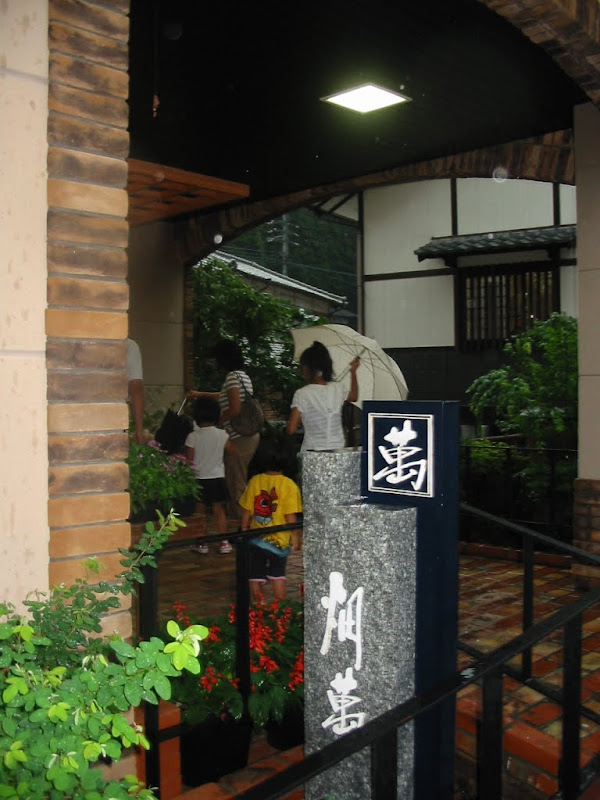 Nabeshima ware pottery - 畑萬(hataman)
The my plate of the first photograph was made with this kiln.
It is a kiln forming a very delicate work.

"Nabeshima oninwa yaki" which is seen in the lower right.
This is an exclusive kiln to give to a feudal lord,
and the technology is "transmission from father to son".
2 comments: 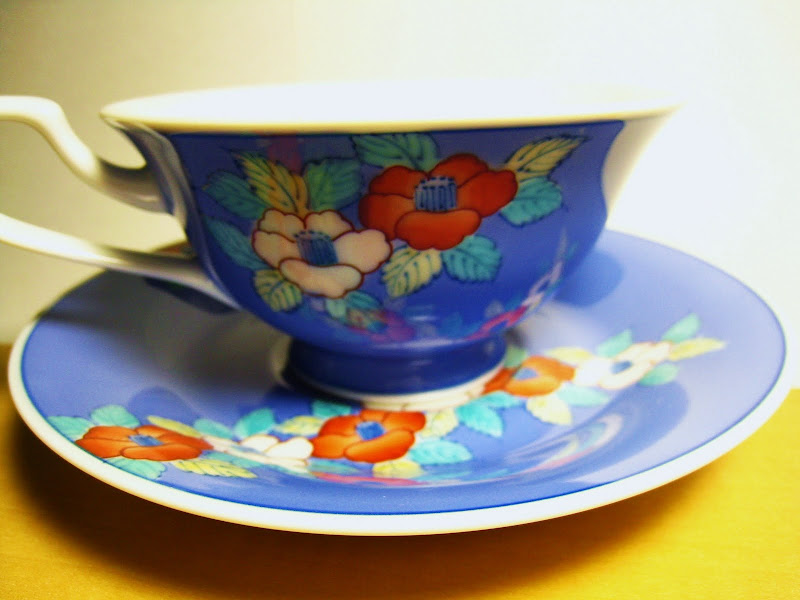 This is porcelain made with the kiln of the place called Ōkawa Uchiyama of Imari,Saga.
It is neighborhood of Arita,Saga.
It is "Nabeshima" ware distinguished from"Arita" ware making.
It is the very delicate surface and the porcelain of an exact picture.
Nabeshima ware is not known at all.
13 comments: 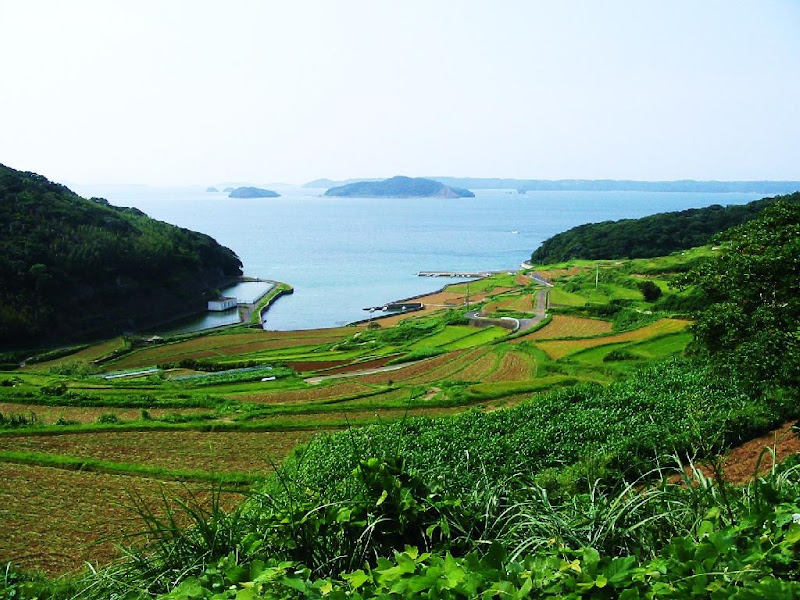 The gain of Tanada is over early from the field of the level ground.
It is located in Fukujima-cho, Nagasaki, the Japanese west edge here.

We can see small islands over there.
We can see the rice field where water is filled with in the evening. 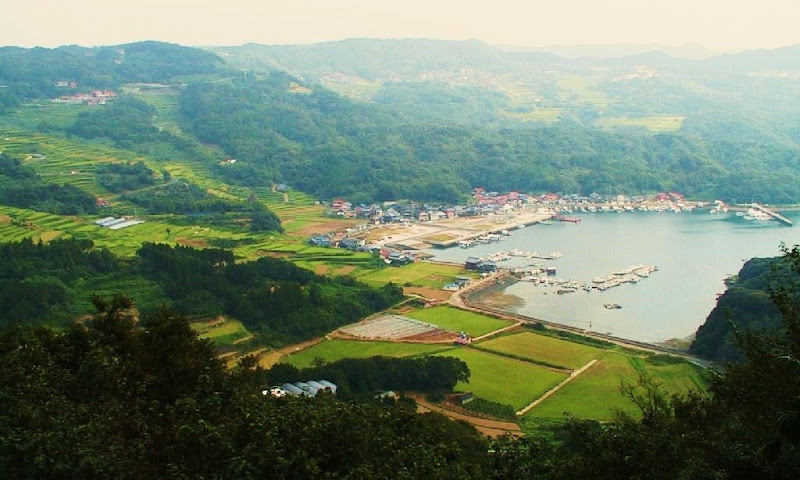 Furthermore, the several hundred kms west direction is Shanghai,
that is near than go to Tokyo.

It is a depopulated town, however, having abundant Nature.
8 comments: 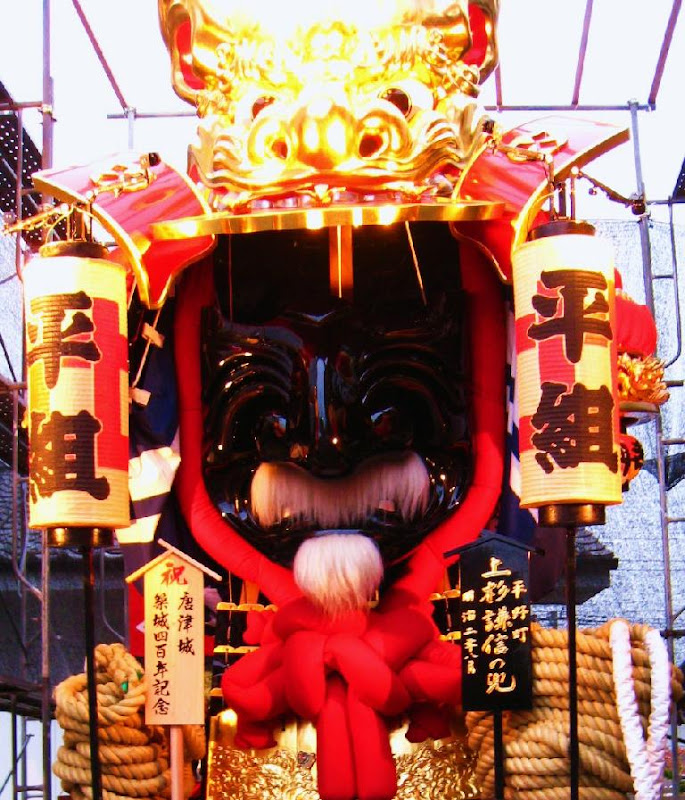 This is helmet "Hikiyama of Kenshin Uesugi"
of the tenth Karatsu Kunchi.

Uesugi Kenshin (上杉 謙信,1530-1578) was a daimyo
who ruled Echigo province in the Sengoku period.

He was one of the many powerful lords of the Sengoku period.
4 comments: 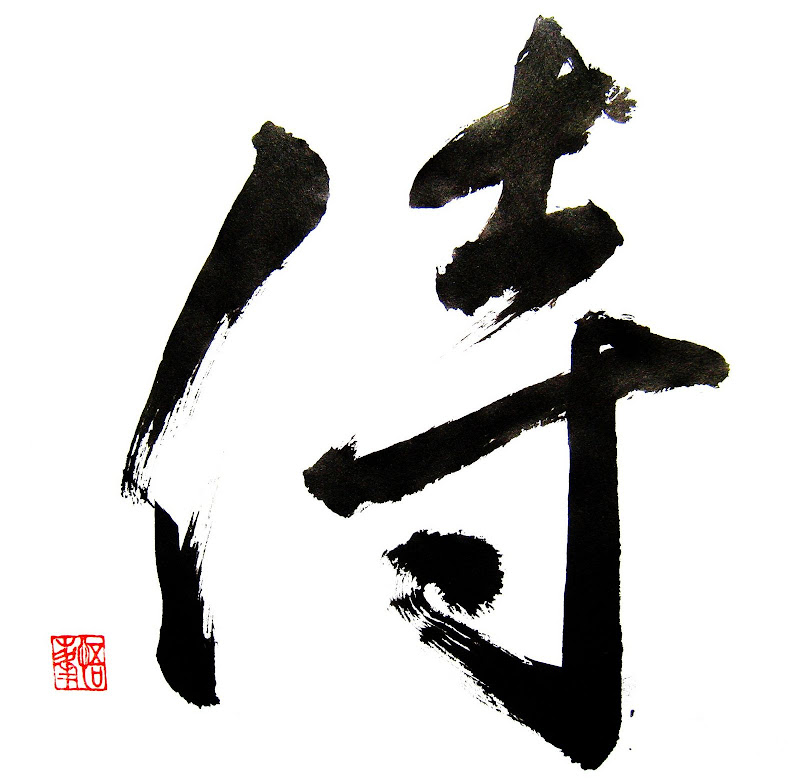 What is "Bushido"? The knowledge is written in"Hagakure".
Hagakure says that "Bushido is to die" in the beginning.
But It is do not merely die, and it is to live in a way to one's aim thoroughly.

When it is "Bushido" to live in every day with strong-willed will like it.
It is written ironically.

The great samurai, Ōta Dōkan created the phrase of the death poem.

When I am like this, I don't think my life to be precious so much.
Because I already recognized that there wasn't my life anymore, and I had lived.
Ōta Dōkan （1432 - 1486）

He was the too superior samurai.
Therefore his lord assassinated him.

The great samurai gave the life of his own to fate.
The soul is holy.

Yes, it may be surely cruel.
However, the ancestor succeeded to the Japanese spirit (Yamato-damashii) as beauty.

We descendant will never forget it. 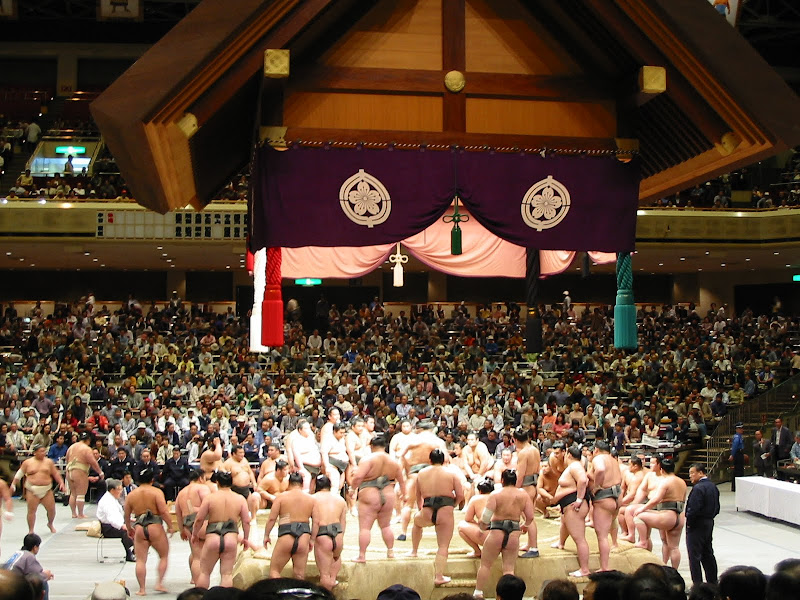 All sumō wrestlers must practice attracting it in front of a spectator with a boss just before a regular sumō tournament.

This is called "Keiko-Sōken" meaning "watch an exercise with all the members".
The greatest boss teaches it in the immediate left of the sumo ring.
There are the other bosses around.
It is shame to have weak pupil for a boss. 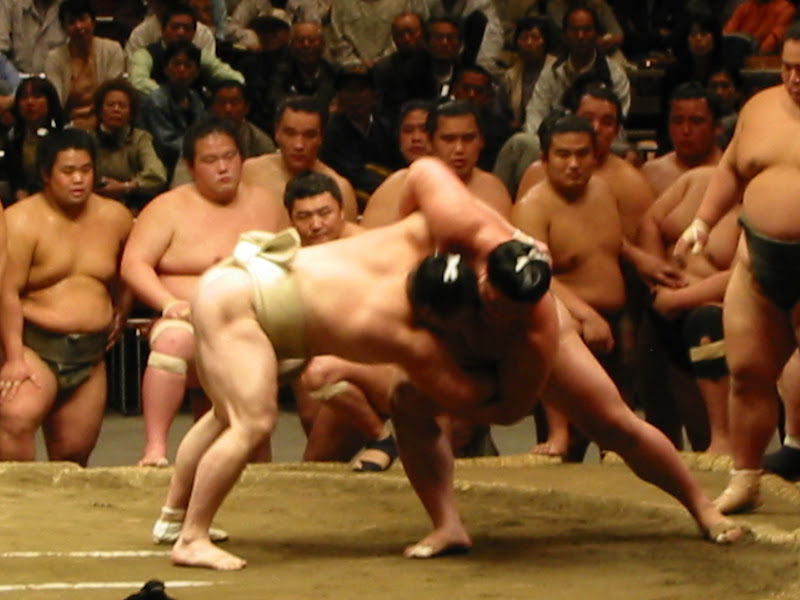 The sumō wrestler won appoints the next partner till he lose and can practice.
If they lost, they must step forward immediately so that it is appointed.
If they cannot do so that to not positive , cannot practice forever.
A yokozuna and the ōzeki attach a white "mawashi", and the other are black.

At the time of exercise of a yokozuna and the ōzeki, the other must watch it outside a sumō ring until the end.

It is Takanohana II to attach a white mawashi.
It very felt honored that could practice with him for sumo wrestlers.
There is not his dignified sumo wrestler after him at all. 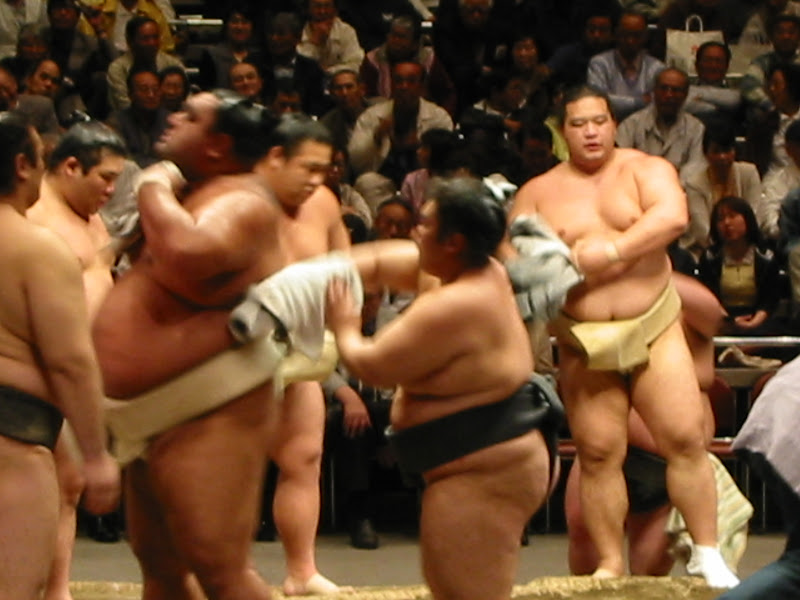 A yokozuna and the ōzeki can wipe sweat.
Only the yokozuna can have an assistant wipe sweat.
Because they clash many times, the whole body is muddy,and most bleed.

The practice is much more severe than the match.
The sumo is the world of a very strict "The man". 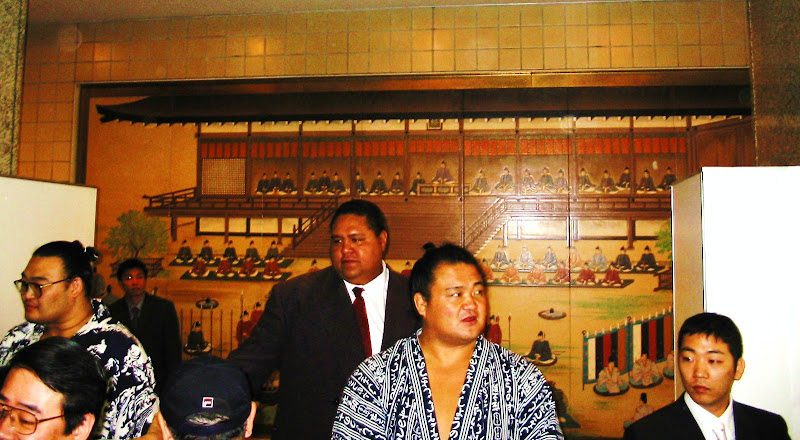 When an exercise is over, the popular sumō wrestler sees off a spectator while shaking hands.

Even if "Yokozuna-Akebono (a suit figure)" retire himself, it was popular very much.
He was very very gentle,tender-hearted "The man". 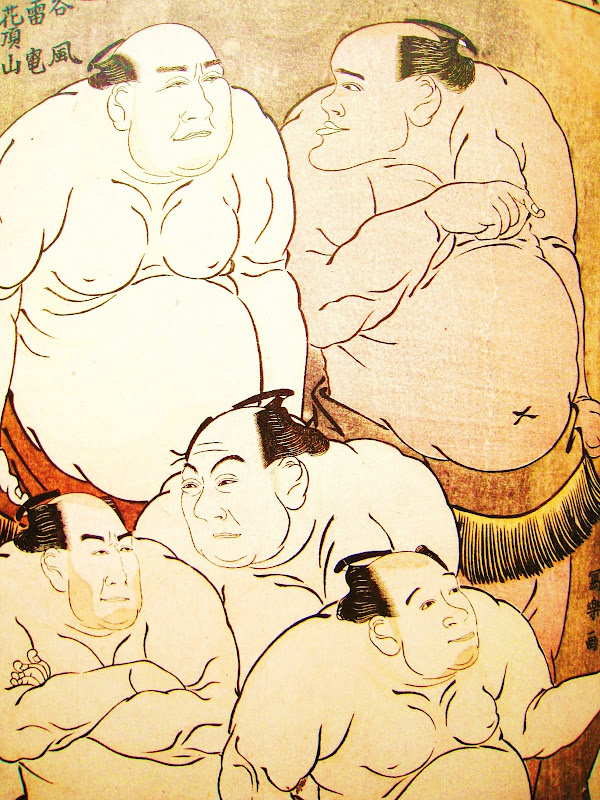 Please have a good weekend all of you.
4 comments: 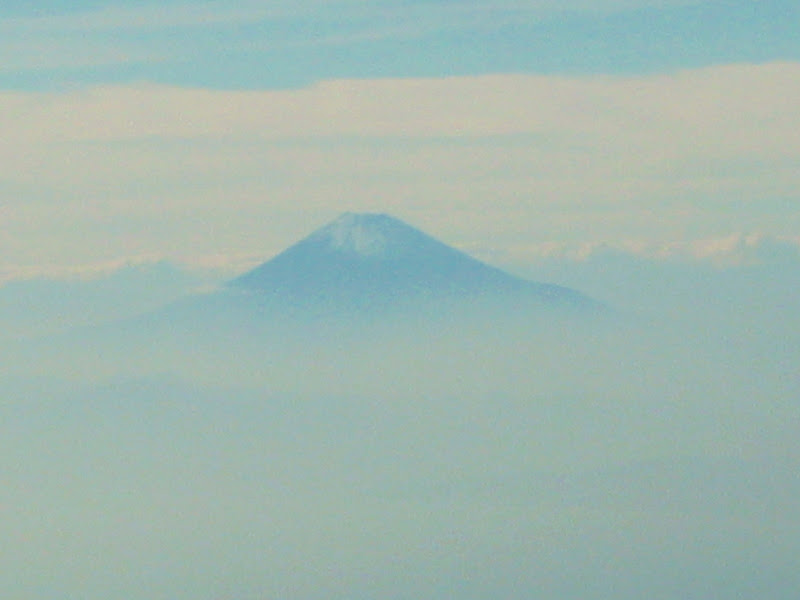 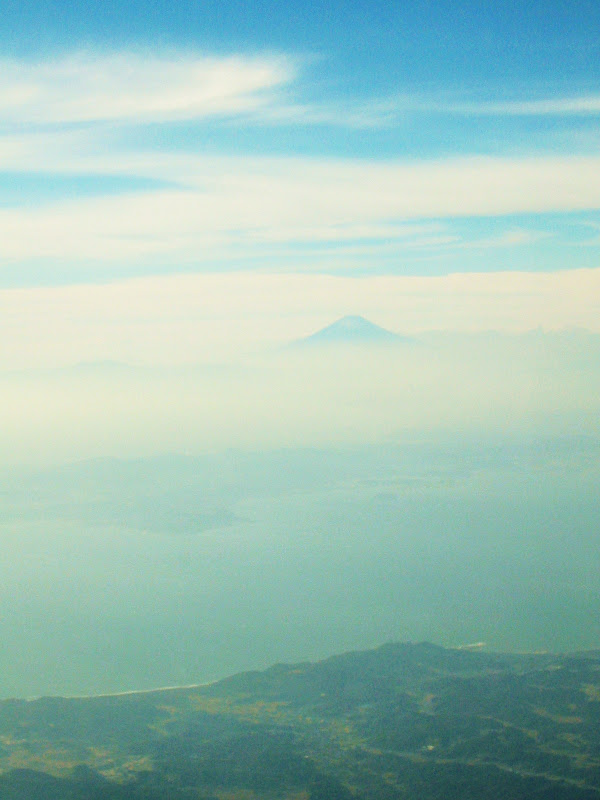 I photographed these right before landed at Haneda Airport.
The telephoto lens of my compact camera could catch that thinly.

It is Tokyo Bay that see below.
7 comments:

Another world in the other side of the gate 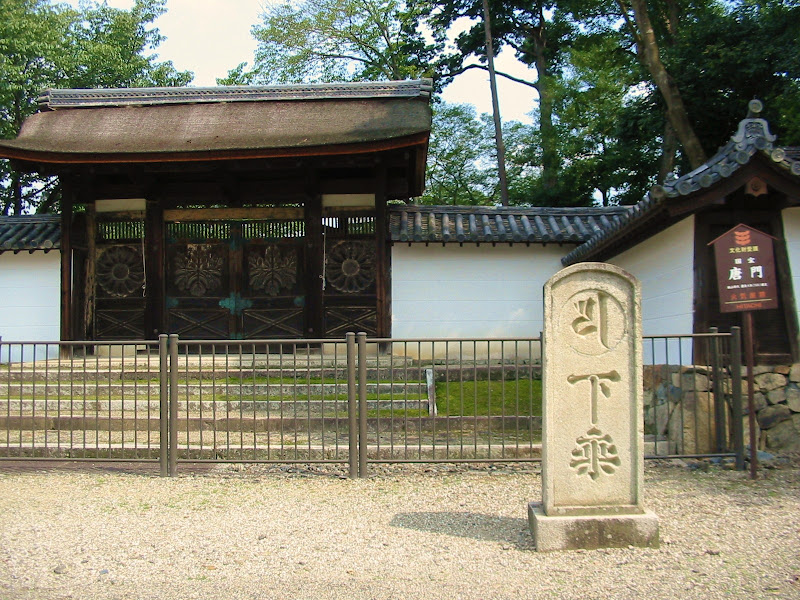 Daigo-ji in Kyōto.It is registered with a world heritage.
This gate "Karamon" built in 1599 is a national treasure. 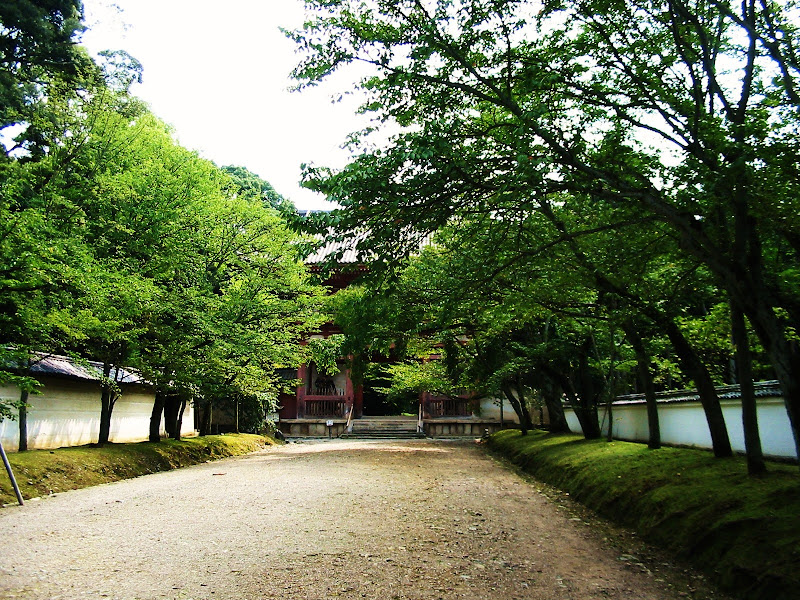 One more gate, the world that can meet Buddha spreads out. 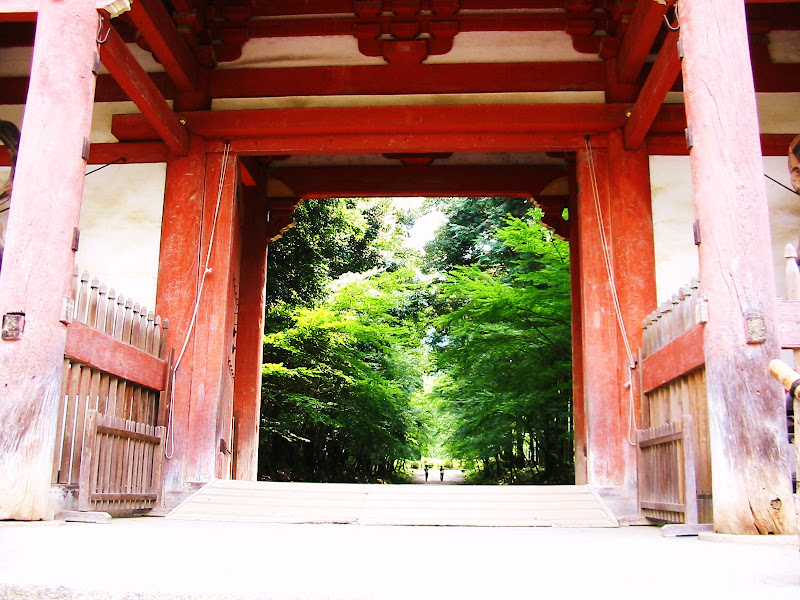 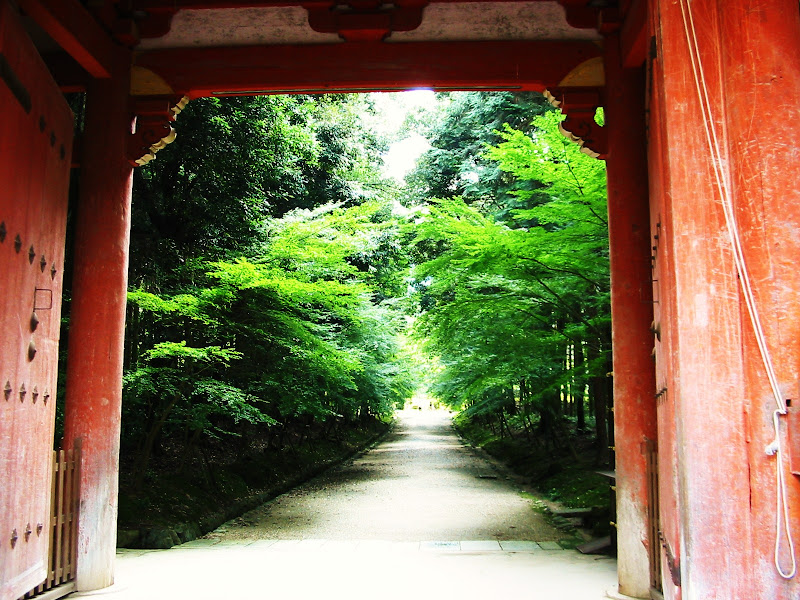 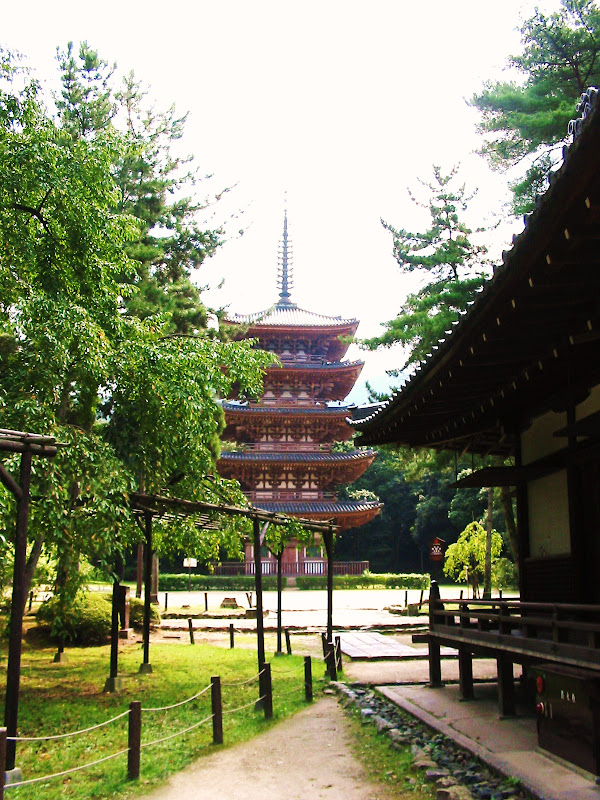 This Five Storeyed Pagoda is built in 951,
and it is registered as a national treasure.
It is a temple having the very large precincts more than 6,600,000 square meters in the Kyoto Fushimi-ku Mt. Daigo spreading east.
It developed as hallowed ground of many mountaineering ascetics.
The portrait of "Kūkai" exists is oldest.

It is difficult even to imagine the front now more than 1000 years.
"Immemorial Time"
2 comments: